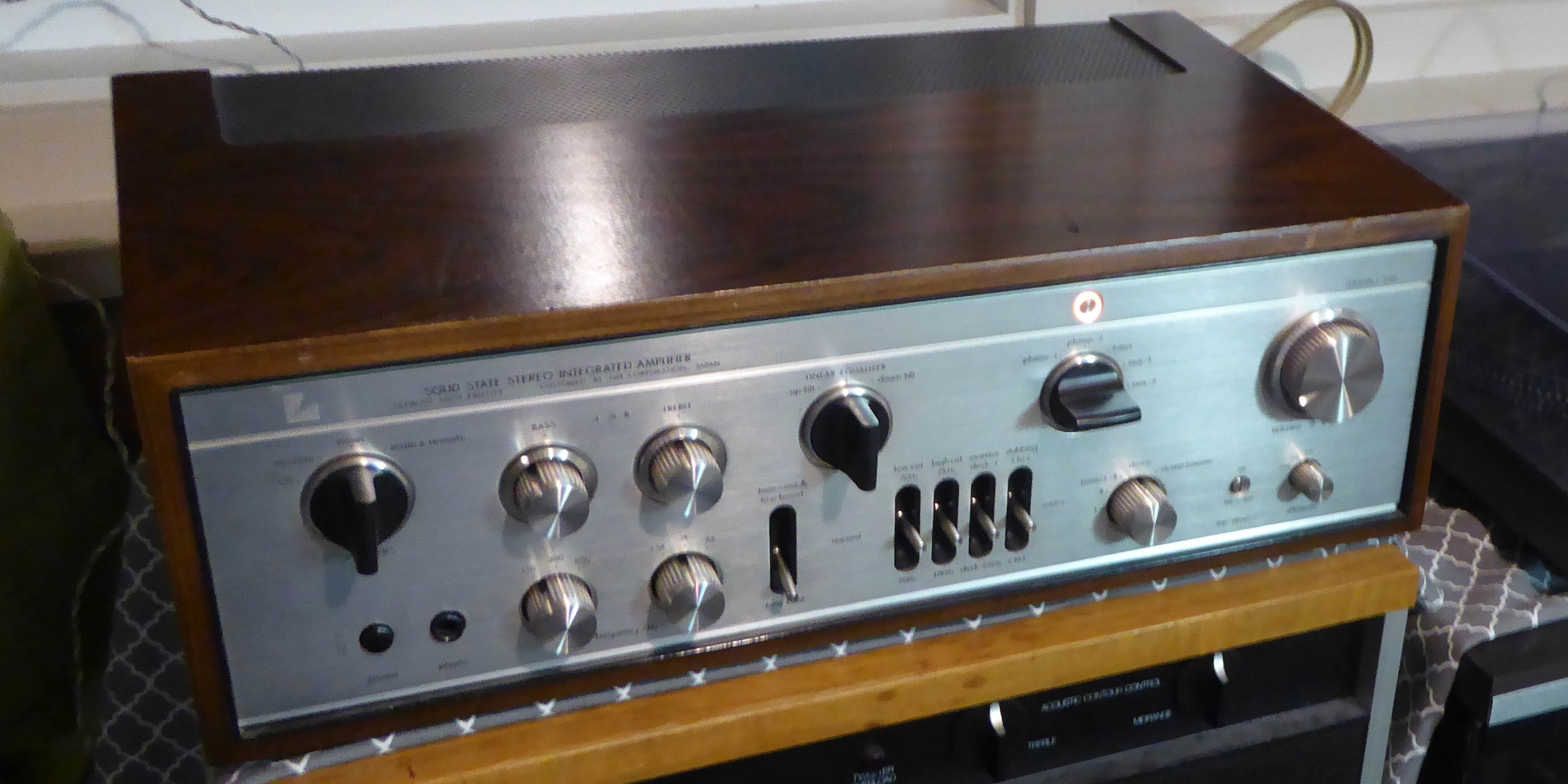 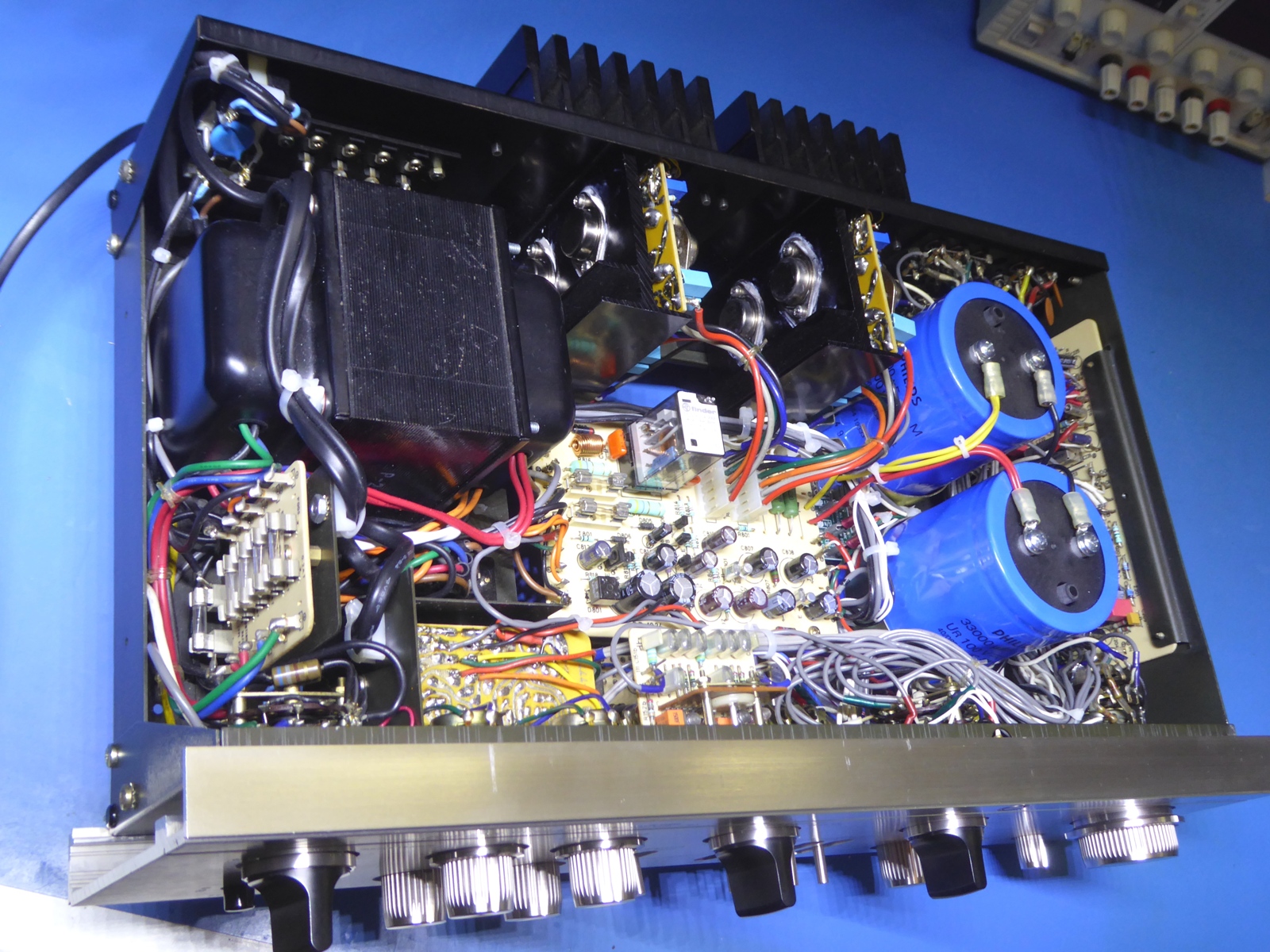 Alike my other L-309V, this amplifier was aquired as defective, this time the issue was it suddenly would put DC on one of the outputs.

This caused the protection relay to cut out.

The idea was to refurbish it to at least comparable to the other one, which is still in operation during 2021.

Also this one did get a full "recap".

Additionally, all circuit cards were unpopulated and populated using other parts, some parts of the main amplifiers and parts connected to switches and RCA connectors excluded.

Several pictures of the amplifier being taken apart

To be able to access the mains power connections, the transformer had to be removed.

Because of all circuit cards to be redone, in the end an empty chassis carrying the messy wiring harness and connected parts remained.

Noteworthy is according the L-85V manual, the transformer of the L-309V is exactly the same one.

Therefore, the L-85V being considered as "more modern" by many, is not justified.....

One of the goals was putting a better operational amplifier in the RIAA equalizer amplifier, as the RC4558 appeared rather noisy

The pictures show the card having its old situation, the opamp is a TO99 style one.

After swiping off the components from the circuit card, it did get an adapted socket for a DIL opamp.

The pin orientation was such, adaptive "wire-wrap" wiring was needed, a commercially available adapter could not be used if wanting the orientation of the chip in line with the circuit card. 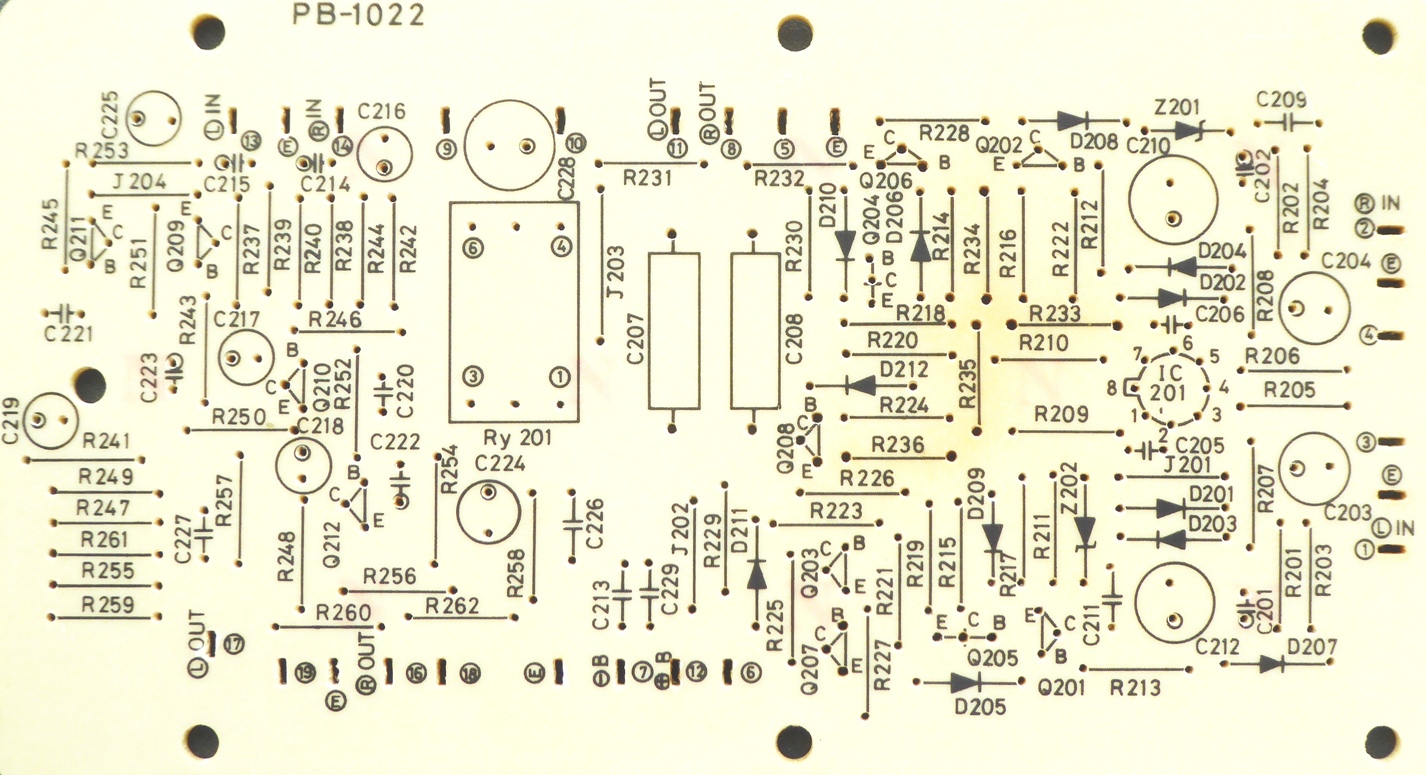 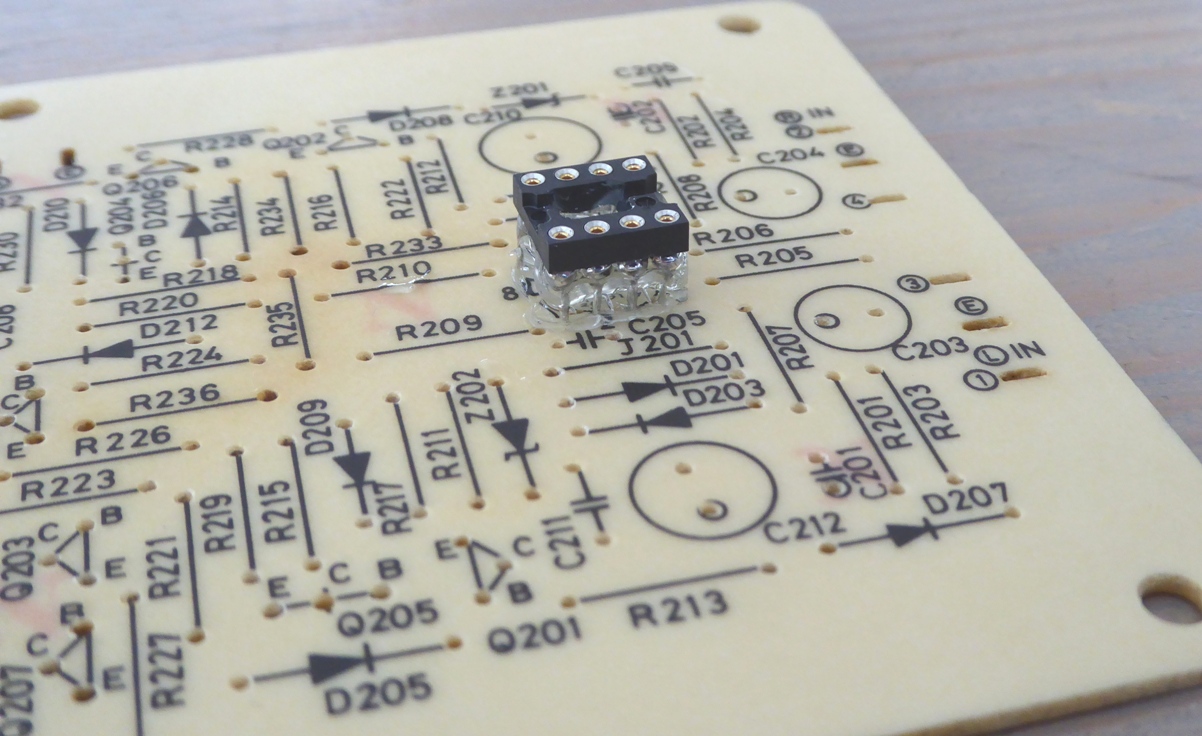 As no service manual is available, the PB1022 board was compared to the circuits used in the Luxman L-85V and Luxman L-309 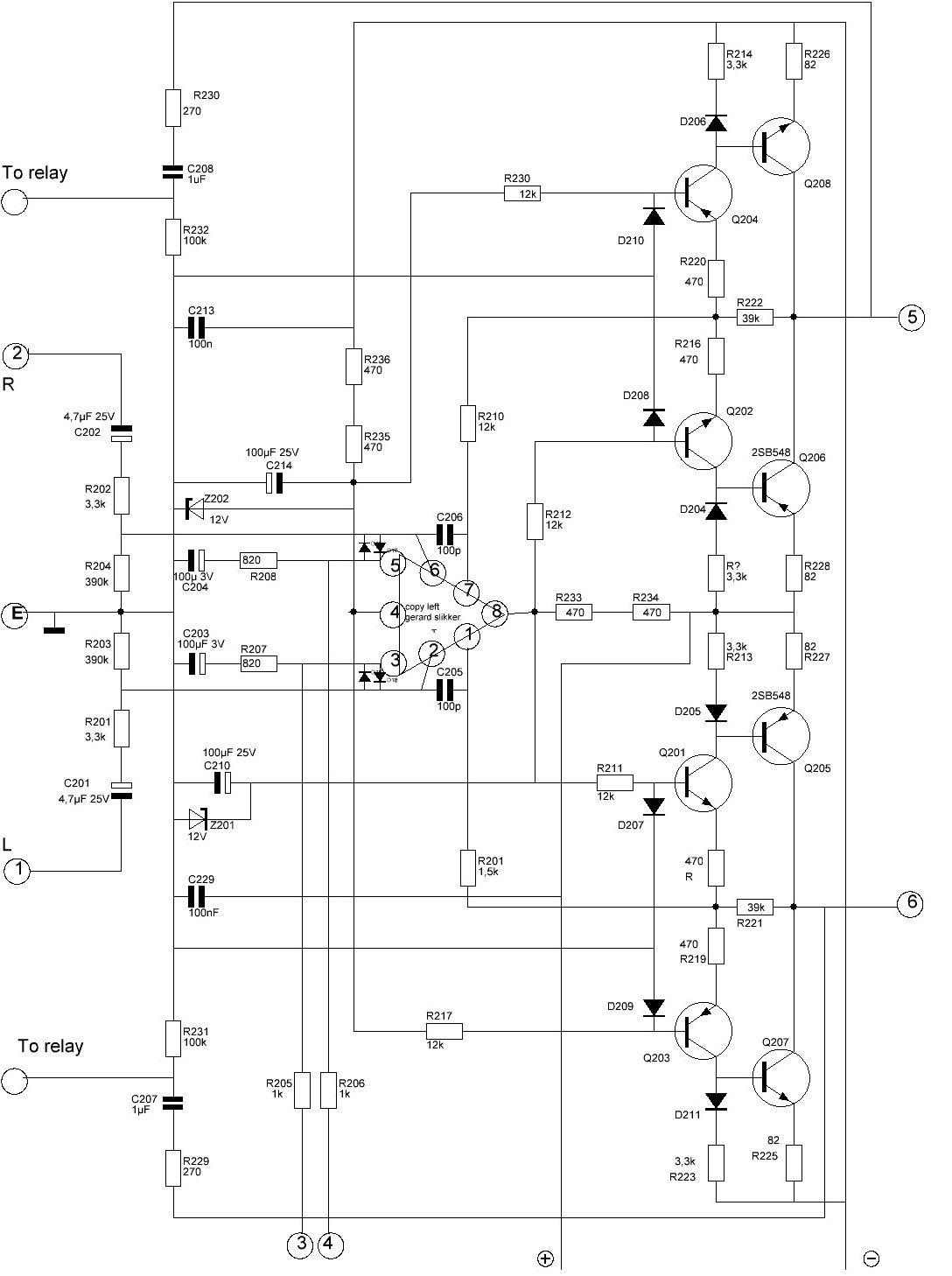 The main amplifiers both were repaired before.

A very funny conclusion is the technician repairing it, apparently had the same component preferences and alike stock I have, myself! Panasonic electrolytics, Metal can tantalums, and Philips green metal film resistors.

Still, the repairs were not "good enough" and the fact blown transistors in these modules cause so much collateral damage, possibly all transistors except the "current source" ones and all parts possibly compromised BY the way a module failed should be replaced.

As there is no part by part exchange possible because reassemble is needed for testing, just replacing the obviously defective parts and call it a day is NOT the way to go with these modules!

Nevertheless, one of the modules is supposed to be not okay, and the assumption was one of the smaller transistors to be the culprit.

The chance was taken, all components were replaced, with the exception of the TO-66 driver transistors and the current source transistors.

After the refurbishment, it was concluded the bias sensing transistors were not attached firmly.

It was decided, to drill a hole and attach a BD329 TO-126 style transistor on each module.

The big power transistors on the heatsinks are replaced by MJ15024 and MJ15025 ones.

Measuring at the rotary switch it appeared to have up to 20 ohms contact resistance at certain switch settings.

Therefore, also this one was totally refurbished. One pin broke during taking the switch off.

The switch was considered too vulnerable to take apart. 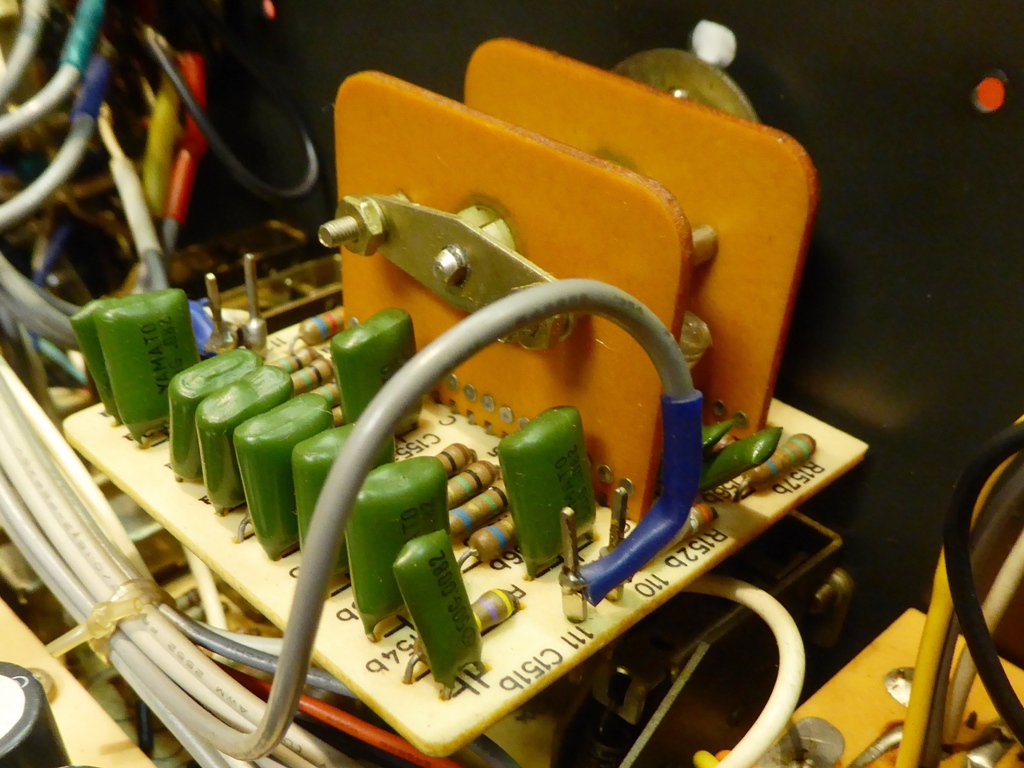 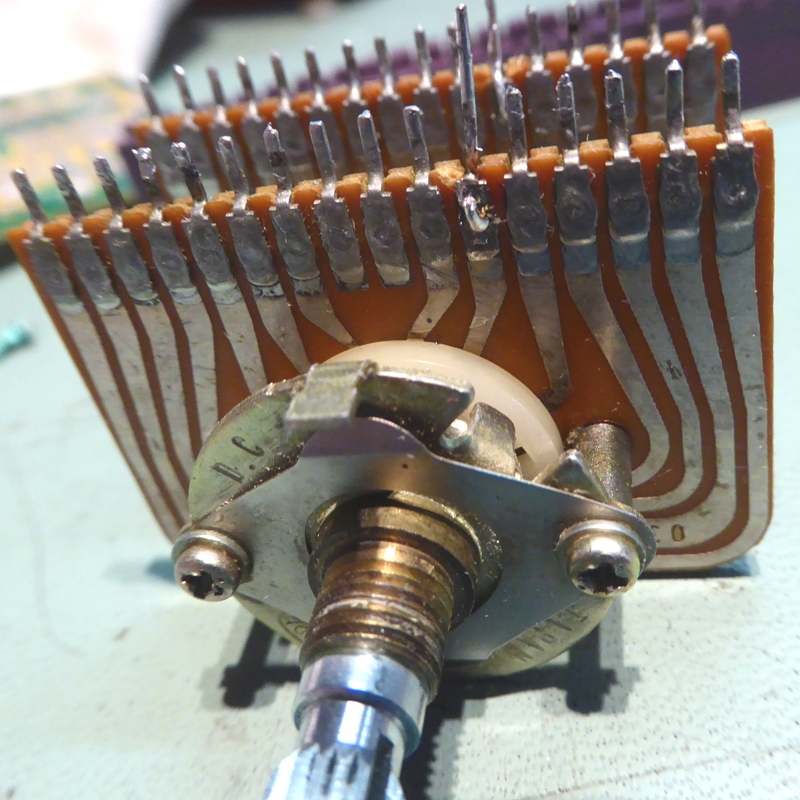 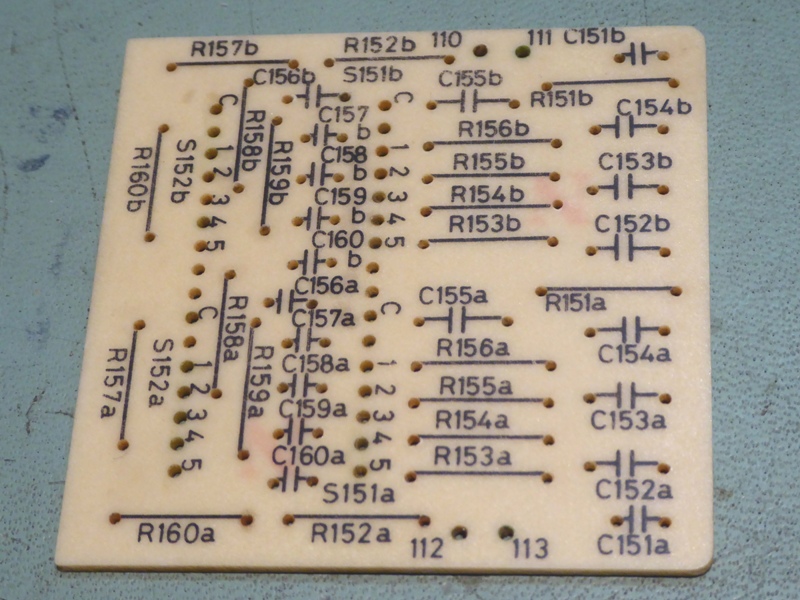 Hopefully, it will stay OK. The pin was fixed and all board components have been replaced.

The tone control board.

This board is marked PB777. The L309 parts list suggests it has this card, however, its schematic says PB727.

The difference seems to be how power is fed, it is done through a 1k resistor.

For some odd reason, the grounds on the card are separated, one of them has a 220 µF capacitor added on the back of the card which goes to the power.

I drilled holes and now the 220 microfarad capacitor resides on top of the circuit card. 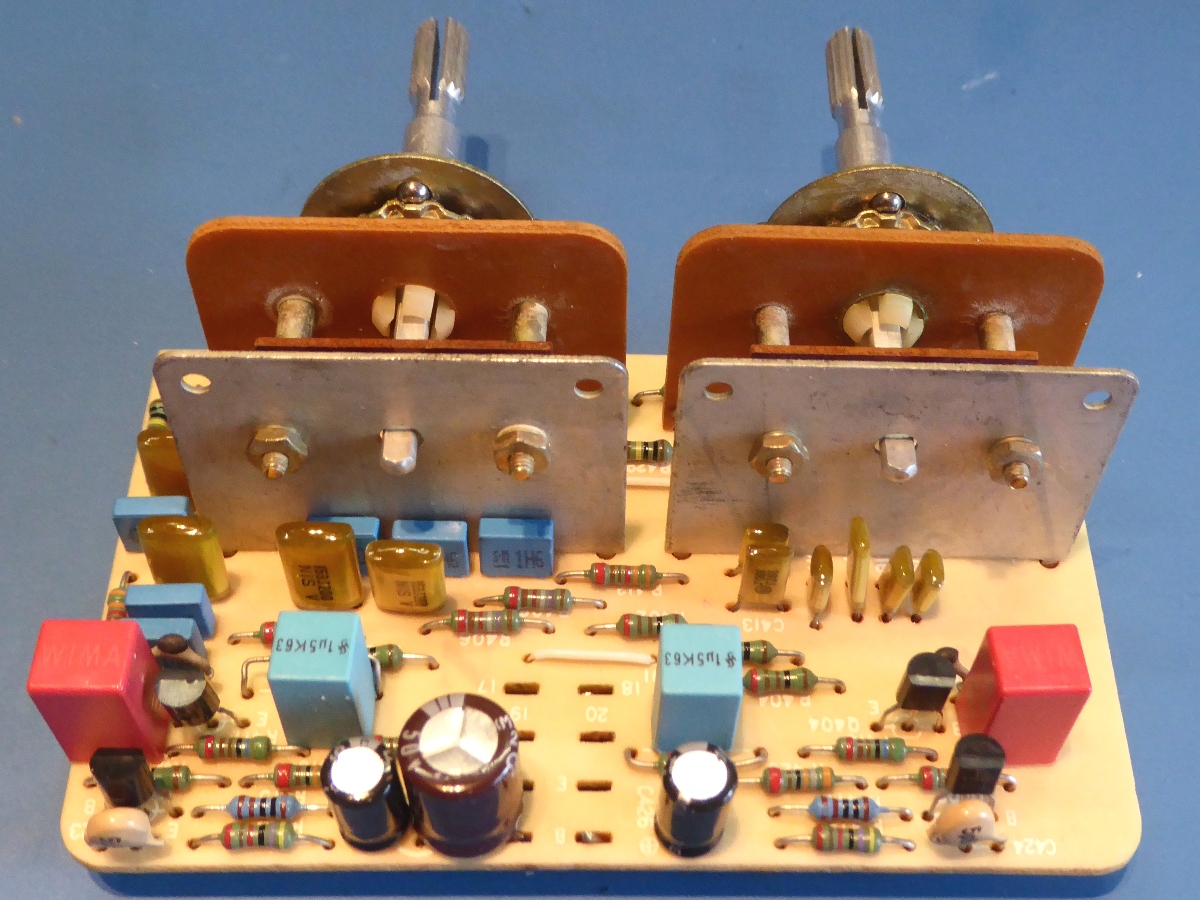 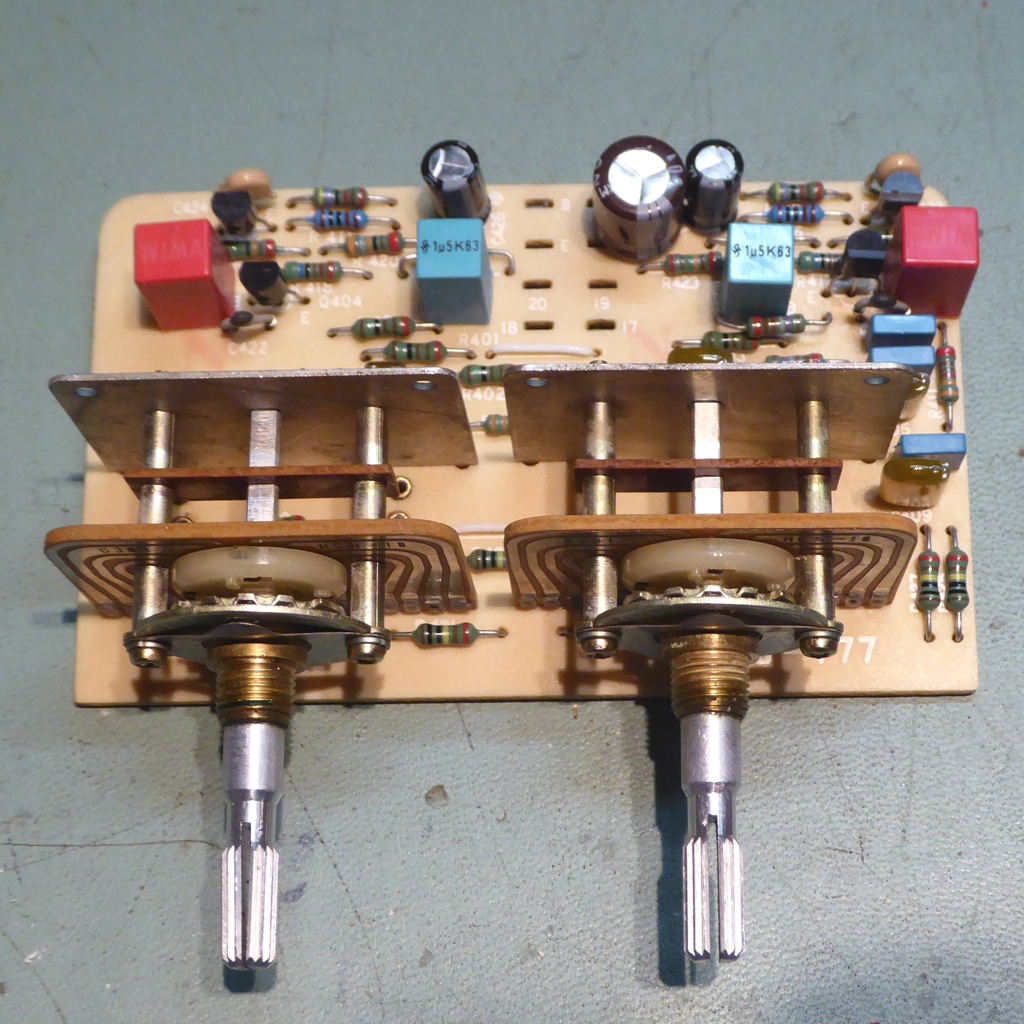 The power supply and protection board PB1024.

This board routes the DC power to the main amplifiers, carries the protection circuit, and provides the preamp stabilized voltages.

The fuse holders of the power board were slopy and the germanium diode was no good anymore.

The board was repopulated using other parts, and slightly modified.

The rectifier diodes were removed and they made room for the bleeder resistors, for which was no room anymore on the new big power supply smoothing capacitors.

The protection circuit differs a little from the one used for the L-85V. 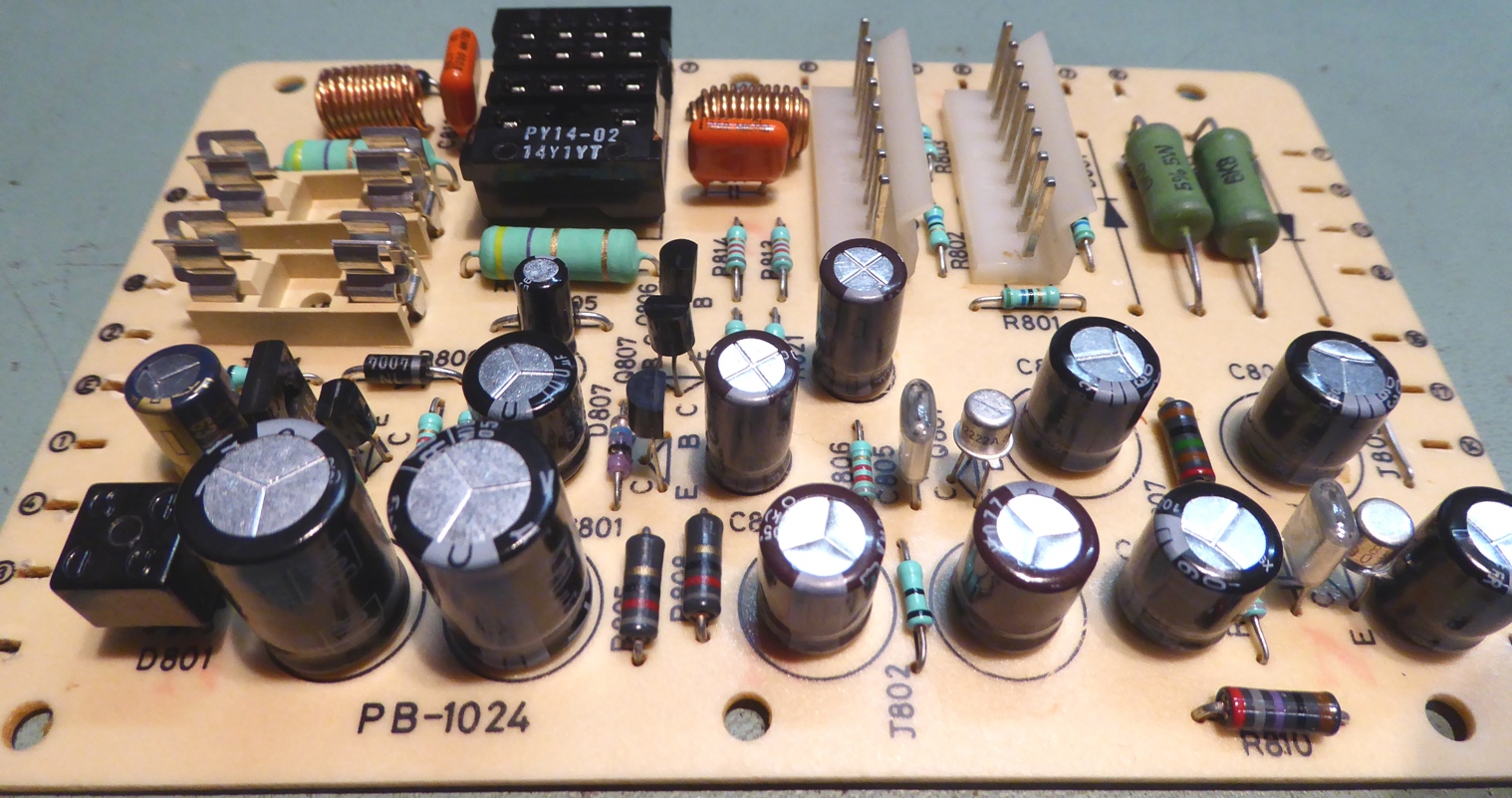 Switches taken apart, the small contacts tend to act like fleas and disappear. 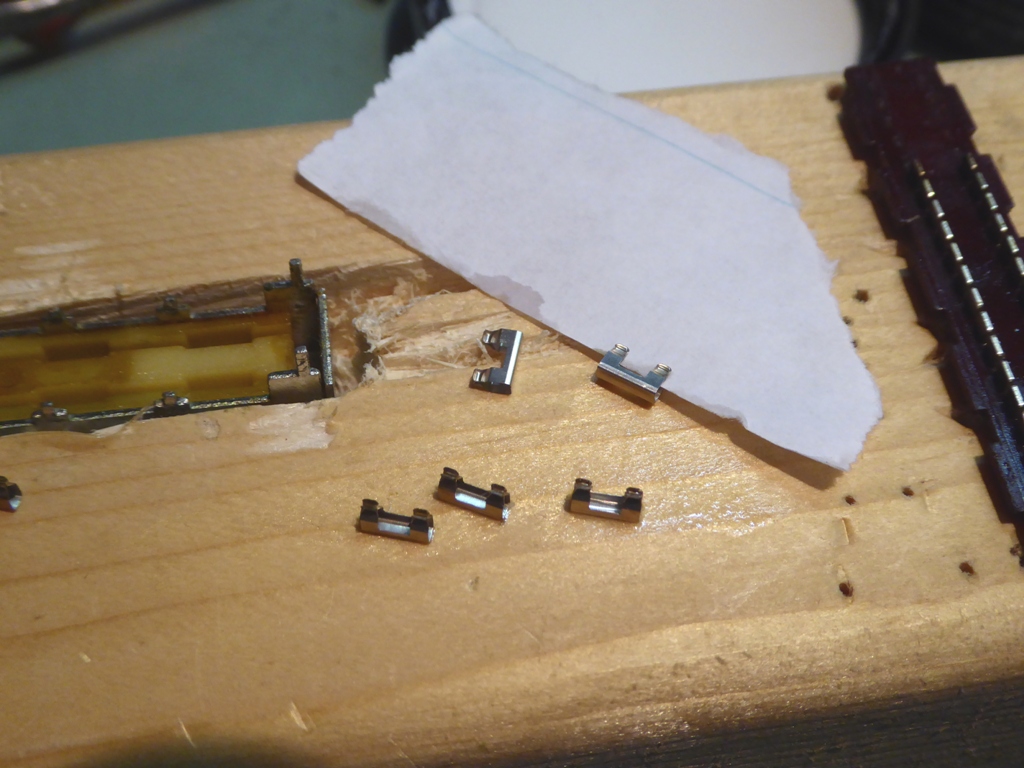 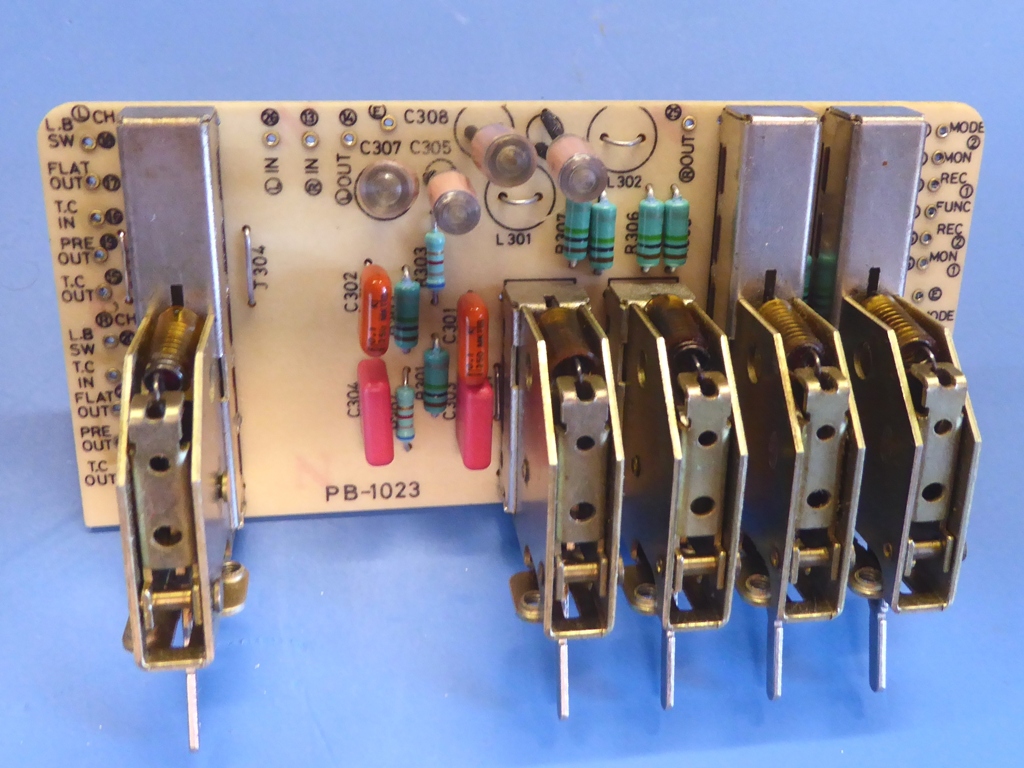 Various pictures, no comment, more info on this amp MAY come.

The big blue Philips capacitors are 22 years old, still much newer than the old ones, they were stored away charged. Four more of these are avail for two more restorations....Recharging around once a year they usually have over 20 Volts left of the initial charge of 100 Volts. 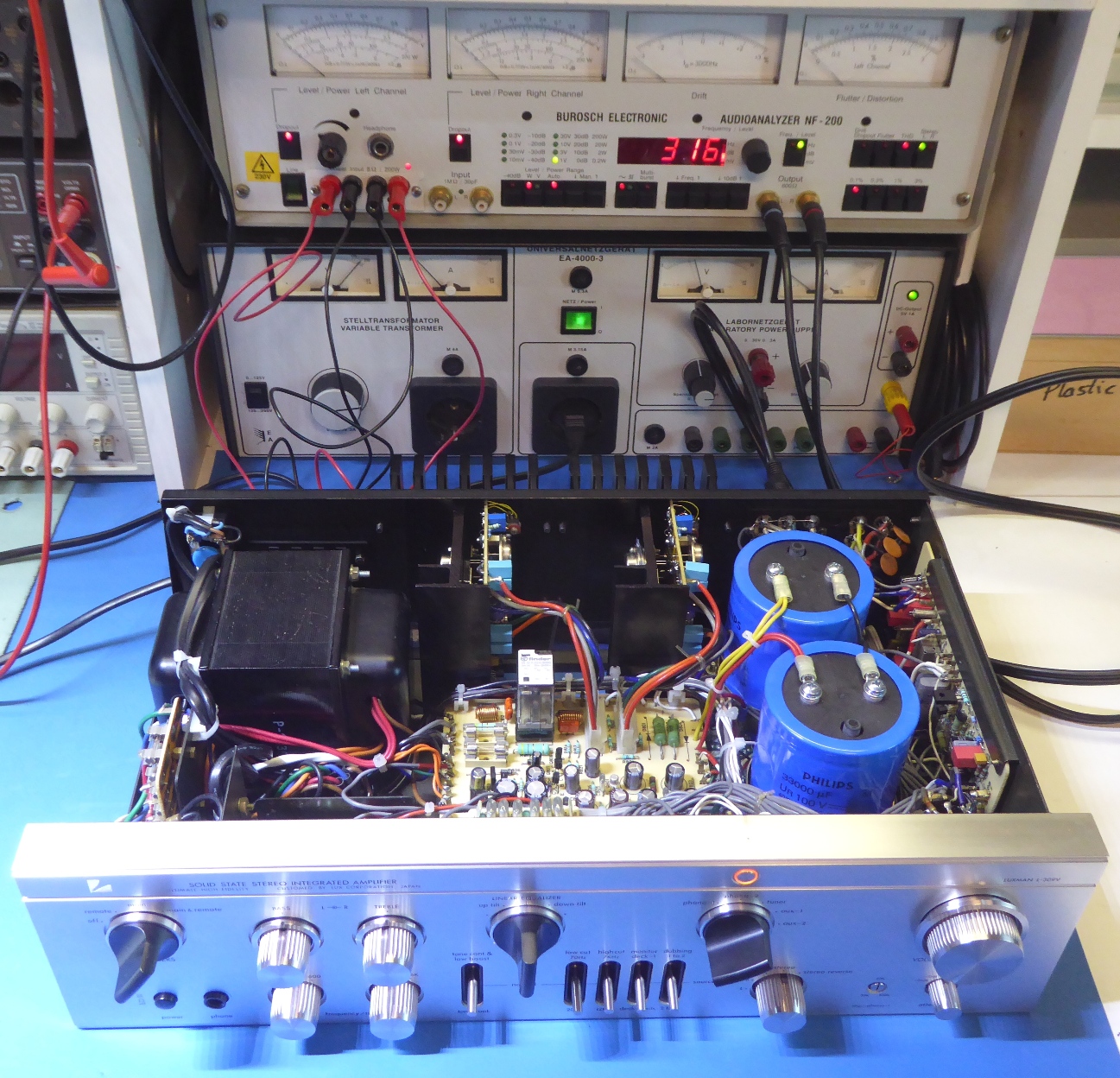