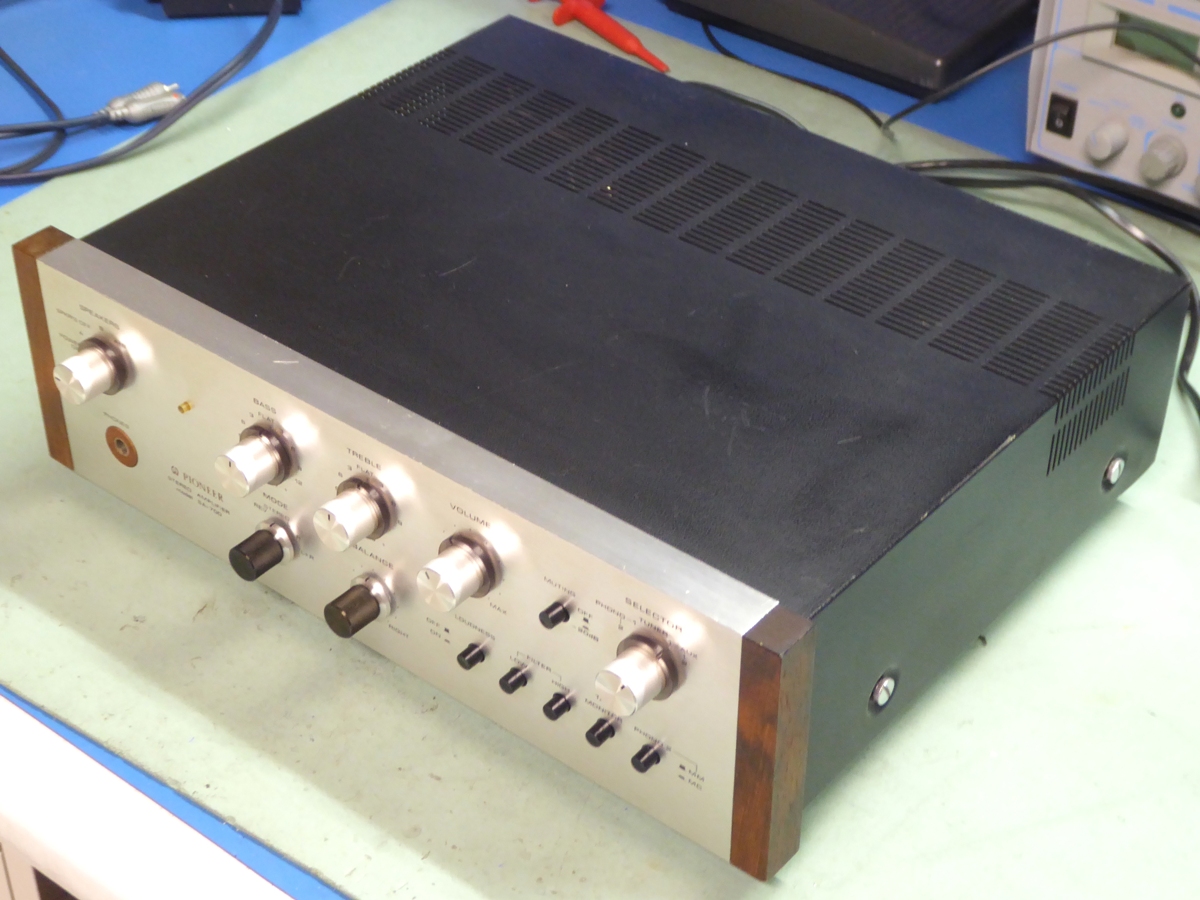 This Pioneer SA-700 was bought on the Dutch Marketplace end of 2021.

It was supposed to give a soft rumbling sound when no signal was present, and advertisement pictures already revealed a missing strain relief on the mains cable.

Inside, some "interesting repairs" appeared. Of course, most obvious was half of a mains plug, which was clamped on the mains lead, to avoid this cable being pulled out!

One channel had BD130 transistors, which had their leads rather poorly soldered.

The other channel had its driver transistors replaced, they had chimney-alike heatsinks.

Both channels did have two series diodes bypassing the bias diode, in fact this made the amp a class B amp!

Still, the amplifier was more or less "working good" on low volume as advertised, (leave out "more" and "good").

The hilarious "very interesting strain relief solution", and the bottom side ot the main amp. The two blue pieces are the diodes bypassing the bias diode and trimming potentiometer.

An ugly replacement of two of the rectifier diodes on the power board, and a burnt resistor in part of the main amplifier.

Pictures of the amp circuit card as it was.

As the temperature sensing diodes were 0.3 Volts apart, they were not trusted. I did choose for a bias multiplier arrangement using a BD329 TO-126 transistor.

Those are mounted against the heatsink, one of the legs of them go under the heatsink into the holes where the diodes once went.

Speedup capacitors mounted over the transistors are at the bottom side of the circuit card, there was no room for them on top.

Next to those transistors little diodes can be seen, parallel to the 180 Ohms resistor. This are "Baxandall diode" arrangements, intended to further reduce distortion.

Most resistors used are half watt Corning GlassWorks metal film ones which have a real glass body, almost nowhere to be found anymore! They are the commercial milspec RN60D equivalent, seems the only info to be found. 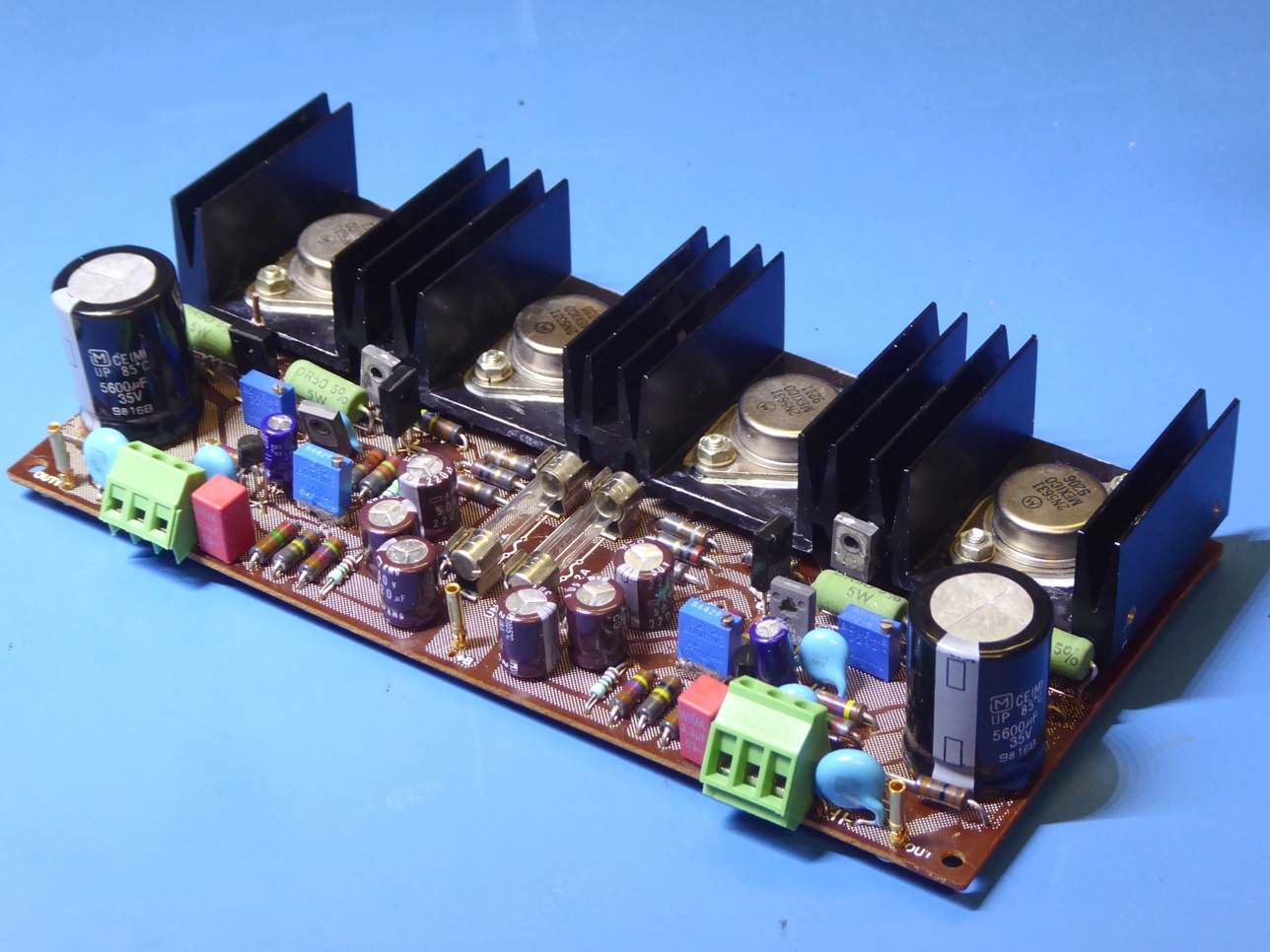 The power supply circuit card provides the rectifier and the 25 Volts regulation to provide power for the pre-amplifier.

The rectifier was replaced, it is good to be a sturdy one, as the main smoothing capacitor is replaced for a 10000 Microfarad one also.

The original trimming resistor appeared to be the very cause of the "runbling"sound if the amplifier was without signal.

Phono Moving coil preamplifier, which is switchable from the front panel.

It also appeared rather tricky to loosen the wires, so the card was not taken out of the amplifier, at all.

On this card, Pioneer used the 5-band color code resistors, which are supposed to be low noise.

Apart from new electrolytic capacitors, this one did get new transistors and four resistors were replaced by metal film types.

The control amp did get new capacitors and transistors, except for the 2SK17 jFETs.

It appears Pioneer made the very same mistake as on the very same circuit board in my SA-900. They used a 33 microfarad 6 Volts capacitor on a spot where close to 10 Volts resides and a 4.7 / 25 Volts is specified, C7 (17 on schematic) and C8 as can be seen on the schematic here.

Banana sockets were used for the loudspeakers "A" selection setting, since Pioneer loudspeaker plugs are scarce.